The Golden Dog by William Kirby 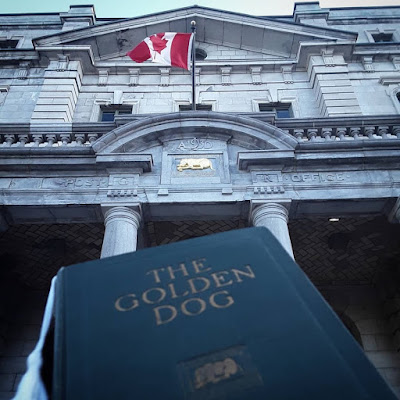 Back in August, I was perusing the shelves of one of my favourite used bookstores in Québec when I came across a dark corner where stood the section with English books. As my eyes adjusted to the lack of proper lighting, my gaze fixed upon a glint of golden lettering stamped on a green spine. Before even reading the title of the book, I immediately recognized the tiny figure of a golden dog, gnawing on a bone. The original sign it is based on is a relic of New France, though the federal building on which it is fixed is not. Ever since I moved to Québec City nearly a dozen years ago, that very figure carved in stone greets me every time I walk down the Côte de la Montagne in the old walled city. The Golden Dog, as it's known, is infamous. And the book I was now holding in my hand is partly responsible for this reputation. Needless to say, after years of hearing and reading about this book, I just had to buy this copy and read it. And what better way to top off my series of Halloween blog posts than to review this Gothic novel? (Please be advised that what follows is off the cuff, without any in-depth analysis of the historical content--which would require a whole other post in and of itself).

The author, William Kirby, was born in England in 1817. He moved to Canada in 1839, the same year he came across the mysterious stone sign bearing the phrase: "Je suis un chien qui ronge l'os/En le rongeant je prend mon repos/Un tems viendra qui nest pas venu/Que je morderay qui maura mordu" (“I am a dog that gnaws his bone/I couch and gnaw it all alone/A time will come, which is not yet,/When I'll bite him by whom I'm bit.” After a long line of jobs and careers in what is now Ontario, Kirby spent a few weeks in Québec in 1865 where he rekindled his fascination for the strange sign. Twelve years later, he published his magnum opus, The Golden Dog.

The novel begins by presenting New France as an idyllic land where the Habitants are happily governed by a just and honorable tandem of church and state. Though the war of Austrian Succession is currently taking place, the colonists seem to have only one main bother: the intendant François Bigot and his gang, busy bleeding the colony for profits through their mismanaging of the Grand Company of Traders, nicknamed the "Friponne" (the Swindle). Opposing them is the Bourgeois Philibert, the honorable owner of the Golden Dog, apparently the only rival store in Québec and the only thing preventing their complete monopoly on the sales of merchandise.

It is in this setting that we meet Amélie de Repentigny and Angélique des Meloises, both the main focus of the story. Amélie secretly desires the love of Pierre Philibert, a colonel and honorable man like his father the Bourgeois. Angélique, however, has bigger ambitions: renown for her beauty she wields like a weapon to get anything she wants, she has set her eyes on obtaining the ultimate lavish life by marrying Bigot. Quite to her dismay, however, she discovers Bigot has a dark secret from his time spent in Acadia... Pressed by the Pompadour to marry someone else in France, he had been forced to rescind his promise to marry his fiancé, the naive but chaste Caroline de St. Castin. After Bigot's departure for Québec, Caroline ran away from her father to rejoin him. Embarrassed by the situation, the Intendant keeps her hidden away in his mansion, unable to bring himself to marry her and fearing the authorities will discover he is the reason she fled her family.

In the meantime, Angélique is being courted by Pierre Le Gardeur de Repentigny, Amélie's brother and best friend to Pierre Philibert. Though Angélique honestly loves him, her ambitions prevent her from accepting his affections. This quest for love isn't Le Gardeur's only problem: throughout the novel, Amélie and Philibert attempt to dissuade Le Gardeur from mingling with Bigot's gang. Indeed, ever the manipulator, Bigot entices Le Gardeur to remain in his inner circle through drinking and gambling.

The story reaches its climax when Angélique, desperate to secure her marriage to Bigot, hires the witch La Corriveau to poison her rival in love. Upon his discovery of Caroline's lifeless body, Bigot has no choice but to have the her buried secretly in his mansion. Following the murder, Angélique rebuffs Le Gardeur's love a final time, making it clear she is to marry Bigot. Ironically, the Intendant suspects her implication in his fiancé's death and resists her advances. In the meantime, Le Gardeur drowns his sorrows at the Friponne, drinking and gambling away his woes.

[Spoiler alert] Later, as Philibert and Amélie finally admit their love to each other and are set to be married, Le Gardeur, in a drunken tirade, accidentally stabs and kills the Bourgeois Philibert. Learning of the murder and remorseful for her brother's actions, Amélie flees to the Ursuline convent to spend the rest of her life as a nun repenting for him. Le Gardeur is sent to France by the governor to be judged by the king, only to be pardoned and left to live out his life as a model but passionless officer. Philibert, heartbroken, stops daily at the convent to beg Amélie to see him. After an unspecified amount of time goes by, she finally accepts, only to die in his arms still begging for the forgiveness he already gave years ago and kissing him one final time.

The novel's bleak ending isn't the only element placing it firmly in the Gothic genre. The supernatural pervades its themes, from witches to werewolves, to many characters displaying the power of premonition. The settings themselves add to the atmosphere: mansions with hidden doors and passages, as well as dark forests and a witch's hovel. Yet, despite these literary motifs which should qualify this novel as an exciting read, the book is quite unfortunately a near absolute bore. Indeed, Kirby seems obsessed with reminding us how good or how evil each character is. More than once I caught myself screaming internally: "I know already. Get to the point!". The novel is easily twice as long as it needs to be. And that's saying something, considering this is the introduction of the edition I read(!):

In issuing a new edition of The Golden Dog it has been thought necessary to give the book thorough revision. Many errors [...] have been corrected. The author gathered together a vast amount of information bearing on the period of his story and of his characters. He saw fit, after the manner of Sir Walter Scott, to incorporate this into his novel. As a result, The Golden Dog, as originally published, contains patches of general and scientific information that mar the flow of the story and weary the reader. Much of this has been judiciously cut out, but nothing has been omitted that is essential to the narrative.

Is the book redeemable for the modern reader? Absolutely, if you're a glutton for punishment... On one hand I could be bored out of my mind by the narrative, on the other, I couldn't look away from the over the top melodrama. And despite the long dry stretches of the story, it is a fascinating excursion in the misogynist and racist mind of this author from Victorian Canada. Women are constantly woefully complaining about the weakness and faults of their gender, all wishing they were men, and the racism against Indigenous people gives us shocking--yet sometimes hilariously awful--lines like "I pray to the bon Dieu to strike you white" (p. 338).

I wish I could say the book is a product of its time, but strictly speaking about style, there's little wonder this book was apparently initially rejected many times before finally being published. Kirby is no Washington Irving or Bram Stoker. Gothic it may be, but Mary Shelley it ain't. Brevity would have served this novel to its advantage, in my opinion. The story in and of itself isn't bad, so much as it is continuously bogged down in superfluous lyrical meanderings.

But despite what I may think of it, one can't deny the novel's importance. It was deemed popular enough in the day to warrant a French translation by Pamphile Lemay, after all. And as Dennis Duffy reminds us:

The cultural and political significance of The Golden Dog far outweighs its minimal belletristic graces. The novel remains of interest to literary and intellectual historians because it marks the local discovery that the Matter of Canada was ripe for fictional exploitation. After Kirby’s achievement, it became clear that a romantically conceived early colonial Canada could furnish settings for one of the nineteenth century’s most popular (and enduring) forms, the historical novel.

I would also add that the novel had a great effect on popular memory since many of its historical misconceptions and legends, both original and perpetuated, persist to this day. This said, should anyone want to read the novel for its historical and literary importance, I suggest grabbing the most recent annotated copy (a hefty 1152 pages), edited by Mary Jane Edwards. I also suggest reading Marie-Françoise Michel and Jean-François Michel's Le Chien d'Or for the historical account of the Bourgeois Philibert's life and death (as I'm about to do after reading the fictional account). [Follow up: Thanks to Martin Dozois for reminding me there's a short history of the plaque over at the Encyclopedia of French Cultural Heritage in North America]

On that note, Happy Halloween everyone!