Posted by Joseph Gagné at 9:02 PM No comments:


As my readers already know, this year I’ve embarked (pun intended) onto an archival adventure in hopes of digging up the identity and experiences of women auxiliaries in the French Army during the Seven Years’ War in America.

Amongst my goals, I’m currently going through the archival record trying to identify individuals who accompanied the army straight out of Europe. Of course, colleagues brought up the question: were women really following troops across the Atlantic Ocean to Canada?

I can understand the skepticism. In the 18th century, women were generally not directly involved in fighting. This was especially true in a colonial setting. Up to this point in the history of Canada, warfare had been traditionally led by smaller groups of men, springing surprise attacks on isolated enemy communities. As for traversing the ocean, one can also argue that every woman who embarked on a ship was an extra mouth to feed when rations were already tightly regulated on board. Furthermore, though I’ve only started researching, I’ve already stumbled on at least one British source stating that soldiers’ wives were turned away at ports:

[...] at the embarkation of the forces, all the soldiers wives not being permitted to accompany their husbands, passes were procured for them, and considerable sums of money were raised by voluntary subscriptions, to enable those poor distressed women to return to their respective countries; and such of the soldiers children, as their mothers could be prevailed upon to part with, were happily provided for at the public expence. (Knox, An Historical Journal, 1:4).

Yet, the nature of warfare itself was changing in North America. Indeed, armies of such size had never existed in Canada prior to the Seven Years’ War (roughly 7000 troops were sent to the colony throughout this war). The shift towards a larger standing army meant a military community of sorts now existed outside of colonial cities. After all, there were never more than a few major battles and sieges per year, each requiring months of on-site preparation. And so, instead of a fleeting presence in the landscape, the army was now building new forts, new defences, and... new frontline societies waiting for the next engagement against opposing forces. Women, therefore, had larger roles to fill in helping with, amongst other things, cleaning, cooking, mending, and even offering companionship.


But back to the current question at hand: do we have proof women followed the French army from Europe? After all, they are relatively absent in the historiography of this war. Well, my early experience reminds us once more that in history, you’ll often not find what you’re not looking for in the first place. Case in point, a colleague who had studied military embarkation lists gladly shared with me over 500 photographs he took of French archives. Knowing what I was looking for, he added that he had never spotted any women in these documents. Well, as it turns out, he had been too focused on the soldiers themselves to notice. From these documents, I’ve managed to add 43 women to my database! Considering these sources are from a single port, I’m therefore just scratching the surface.

So far, all the women I’ve identified were the wives and daughters of individual soldiers, with no mention of occupation. But from one French officer’s journal, I am aware of at least one case where three women were permitted to follow on a ship specifically to help with washing clothes.

Now of course, this is all very preliminary as I’m currently busier identifying the sources I want to exploit before even going through any of them. With COVID affecting travel and access to local archive centers, I’m quite lucky to already have had this first glimpse which already proves that I’m on the right track. I’m also lucky for having access to many wonderful digitized documents. For example, for anyone compiling similar databases and having trouble deciphering French place names in 18th century manuscript records, I’ve found this document quite useful: Gazetteer of France Containing Every City, Town, and Village in That Extensive Country, Shewing the Distances of the Cities and Great Towns [Etc.]. Vol. 1. 3 vols. London: Printed for G.G.J. and J. Robinson, 1793. (Google Books).

So what now? Well, I’ll keep slowly but surely building up my database of women involved directly with the army. Hopefully cross-referencing will allow me to identify a handful of individuals with larger stories to tell through what I hope will be a heavier archival presence. I’ve already started in some measure: thanks to Rénald Lessard’s excellent list of ships that transported troops to Canada, I already know of 4 women who never made it, their ships having been captured by the British.

I’ve also been able to demonstrate the kind of stories than can be gleaned from these nuggets of information gathered from cross referencing. For example, going through my documents regarding departures from the Île de Ré (near La Rochelle), I came across a list of reserves being held on site in 1758. Scanning the near-dozen names of women who were also tallied, I recognized two: Françoise Lambert and Marie-Anne Simon. Both were the names of women who had followed their husbands to Louisiana in 1756. Or so I thought…

Double checking the list of men, I found Françoise and Marie-Anne’s husbands as well. What was going on? Had they somehow skipped their departure two years earlier? This was highly unlikely: deserters and other absentees would be catalogued as well. I had another theory, but since Lessard only listed Canada-bound ships, my hunch required digging through period British newspapers. After wasting an afternoon figuring out the best databases to consult, I finally stumbled on the answer I was looking for, starting with the first case I could crack, that of Marie-Anne.

Though nothing is yet known of Marie-Anne Simon’s background, we know she was married to Antoine Martin, a soldier and roofer by trade, born in Besançon to Guillaume Martin and Louise Bernard. On November 30, 1756 at Île de Ré, the couple followed along with 59 other soldiers on board the Don de Dieu, heading to Louisiana. Marie-Anne was not the only woman on board: she was listed along with Marie Pinnier (or Jinnier), wife of soldier François Noël. Thanks to this excerpt of the Manchester Mercury published on April 19, 1757, we now know that shortly after the ship left, the British intercepted her along the coast of Spain: 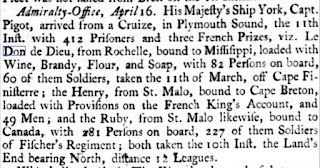 Admiralty-Office, April 16. His Majesty’s Ship York, Capt. Pigot, arrived from a Cruize, in Plymouth Sound, the 11th Inst. with 412 Prisoners and three French Prizes, viz. Le Don de Dieu, from Rochelle, bound to Missisippi, loaded with Wine, Brandy, Flour, and Soap, with 82 Persons on board, 60 of them Soldiers, taken the 11th of March, off Cape Finisterre ; [...].

As for Françoise Lambert, she was the wife of Pierre Herbé, a soldier and labourer by trade, born to Simon Herbé and Marie Kelok in Autry, Switzerland. Just like the Simon-Martin couple, Françoise and Pierre were supposed to be assigned to Louisiana, leaving from the same port with 39 other soldiers on board the L’Aimable Marthe on September 25, 1756. Other women accompanying their husbands were Christine Jardinière (Jean Gabon), Marie-Anne Lery (Louis Le Maire), Françoise Julliere (Laurent Piquet), and Elizabeth Klement (René Chauvauché). According to the Gentleman’s Magazine  November 1756 issue, their ship also suffered a similar fate: “L’Aimable Martha, from Rochelle for Missisippi, is taken by the Britannia priv. and brought into Bristol.”

Presuming both couples mentioned in the 1759 rolle are the same as the ones identified in 1756 boarding lists (otherwise it would be quite a coincidence), we can therefore hypothesize that these two women and their husbands were included in prisoner exchanges and eventually made their way right back where they started their misadventure, never setting foot in North America after all…
Even though Françoise and Marie-Anne never made it across the Atlantic, their stories are nevertheless part of the larger story of the fall of New France. Though today such land battles as that of the Plaines of Abraham come to mind when thinking about the Seven Years’ War in North America, this war had been mostly fought and won on the oceans. Indeed, Great Britain had already crippled the French navy from the get-go. Louisiana in particular suffered from a blockade preventing French ships from arriving for years on end. Françoise and Marie-Anne were first hand witnesses and unwitting participants to this fact as they, along with their husbands, were captured, brought to England, and went through the prisoner exchange process between both countries.

And yet, as fascinating as Françoise and Marie-Anne are, they are but two amongst hundreds of women during this war with equally important stories to be told.

Note: This research is being conducted through the generous financial support of the Social Sciences and Humanities Research Council (SSHRC) of Canada. I also wish to particularly thank Guillaume Teasdale and Peter Way at the University of Windsor, and Rénald Lessard of Bibliothèque et Archives nationales du Québec for their guidance as I wade through new material. 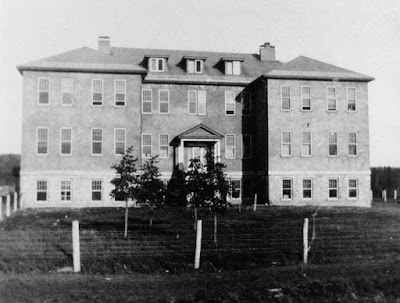