Sad news: Because of a dumb renewal mistake, Electronic New France's address is no longer www.novafrancia.org, but https://novafrancia.wordpress.com/ Please update your bookmarks.

Posted by Joseph Gagné at 1:17 PM No comments:

"The Story of Us" Is Not Quite Our Story… 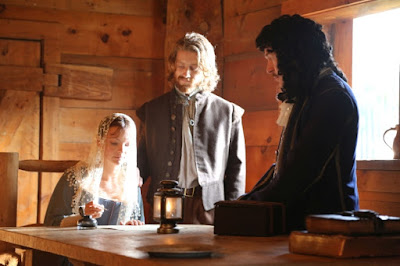 Yesterday was the premier of CBC's The Story of Us, a 10 episode series on Canada's history. Created for the 150th anniversary of the Confederation, such a series reflecting on the country's past would seem a proper idea. After a first such national experiment with Canada: A People's History, enough time and distance has passed to give a televised national narrative another go, this time integrating latest historical research and addressing the shortcomings of the last series.

But telling the country's history in only ten, 45-minute episodes is a tall order. And sadly, after watching the first episode, I must say the result isn't even worth a CliffsNotes version of Canadian history. What we are left with is a jarring, segmented mess.

The episode in question begins immediately with Champlain's arrival to Québec, the past century of European exploration woefully glossed over in a mere sentence. Never mind that Native pre-Columbian history is equally swiftly dealt with by simply mentioning a 12000 year presence on the land. No Bering land-bridge, no nod to recent research on earlier migrations. Nothing.

Suffice to say that the rest of the episode focuses (a loose term here) on Champlain founding Québec, the arrival of the Filles du Roy, the founding of the Hudson's Bay Company, and the Battle of the Plains of Abraham. All in all, 155 years in 45 minutes…

I could amuse myself pointing out various mistakes made in the reenactment of various events, but these are to be expected in any documentary- research time and budget constraints plague all such productions after all.

However, my main pet peeve with The Story of Us is: where are the Historians?

In what is already a disputable primer for the public, I am shocked to see that the producers thought fit to massively outnumber the 3 or 4 academic commentators with innumerable actors, entrepreneurs, dancers(!) and other Canadian celebrities. Being myself a specialist on the Seven Years' War, you can guess my dismay at watching mixed martial artist Georges St-Pierre comment (badly) on the Battle of the Plains of Abraham… Could they not have asked Peter MacLeod or Allan Greer or any other number of Historians specialized in the period? St-Pierre's presence also ends up filling the position for "token francophone" in an episode focussing on… New France. That said, where are the francophone Historians?

The Story of Us, in the words of John Doyle, "is just pop history for Kids". And even then, I feel sorry for the kids. As Doyle remarks further on the lack of Academics:

The idea behind this technique is, one guesses, to lessen the number of scholars and pundits doing the talking and let famous Canadians of some achievement in the arts-and-entertainment world say what the absent academics would say. Fair enough. (There are some academics along for the ride.) But it gets silly and repetitive and could possibly inspire a drinking game involving the guessing of which actor will be trotted out to state the next rather obvious point.

In trying to make Canadian history more appealing to Canadians, the execution of this technique merely ended up chewing time that would have been more usefully spent with actual Historians bringing new insight.


In the end, The Story of Us was scared to address History in thought provoking ways and relied too heavily on political correctness and not enough on new research. The absence of Historians also serves to remind us that we currently live in a world where celebrity is apparently more important than academics.