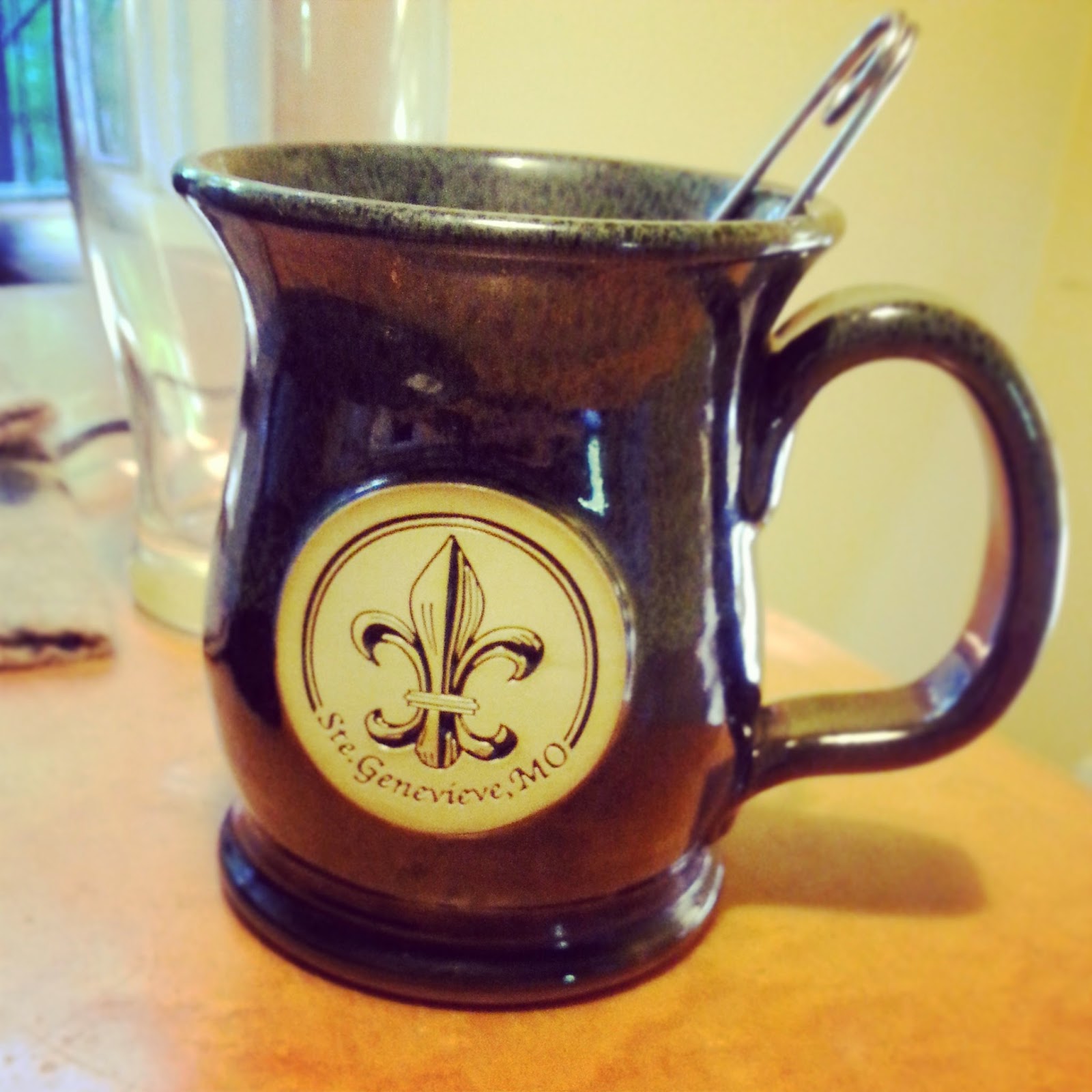 Well, I'm almost done with my masters. I've had the unfortunate annoyance of being asked to modify my formatting to match the new template. It's frustrating work considering I had followed the original template that was imposed on my class a few years back. Oh well. This calls for a good cup of pumpkin chai in my favourite cup. What about you guys? What's your favourite cup to drink from in moments like this?

Posted by Joseph Gagné at 8:46 AM No comments:

Ok, so this isn't exactly New France related, but when it comes to colonial wars, this spoof of 300 is brilliant and hilarious. I just have to share it. (ps: goes pretty well along with this post.)

Posted by Joseph Gagné at 6:04 PM No comments: 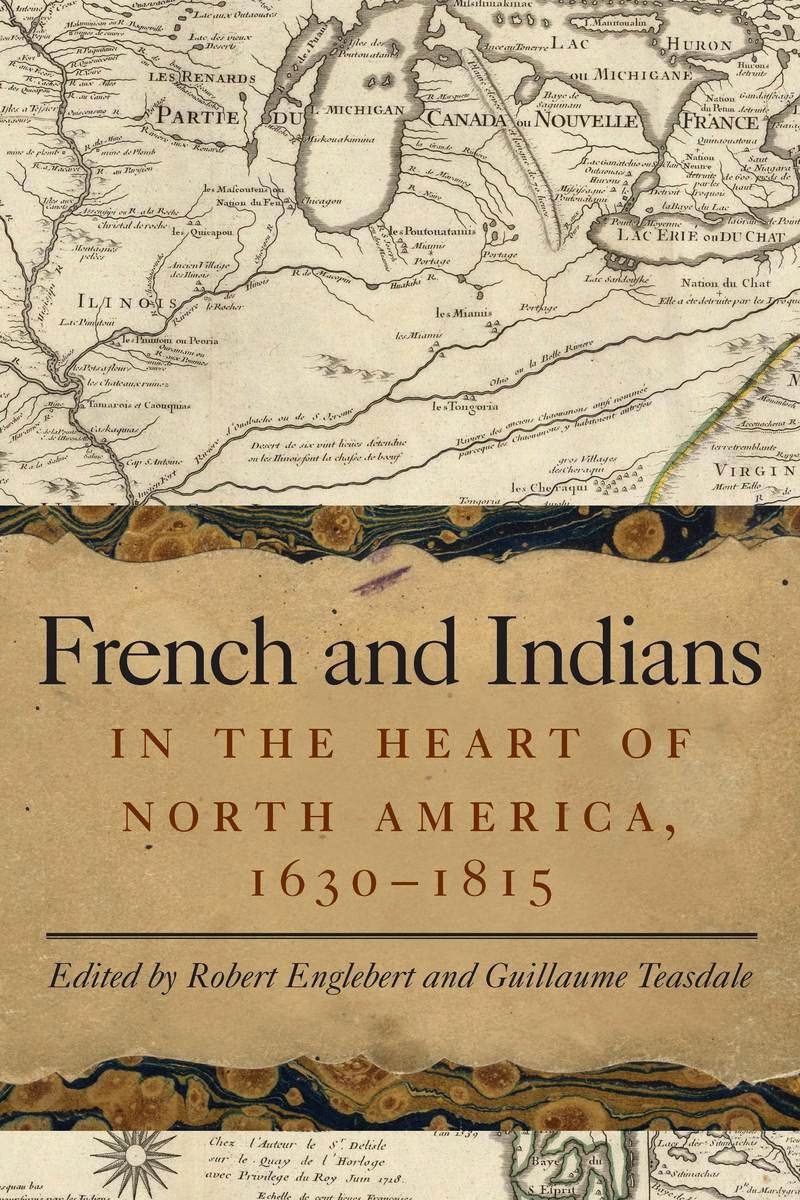 Posted by Joseph Gagné at 11:43 AM No comments: 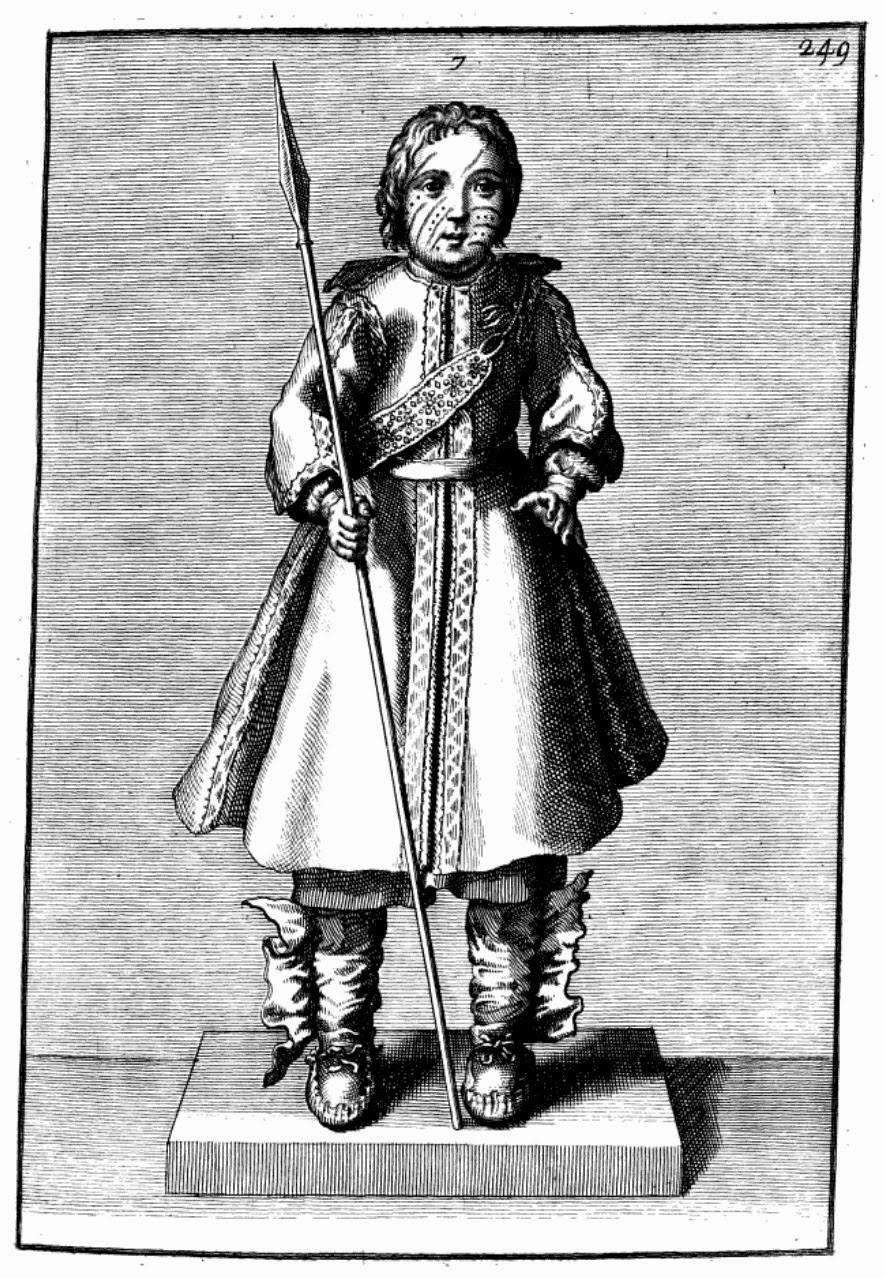 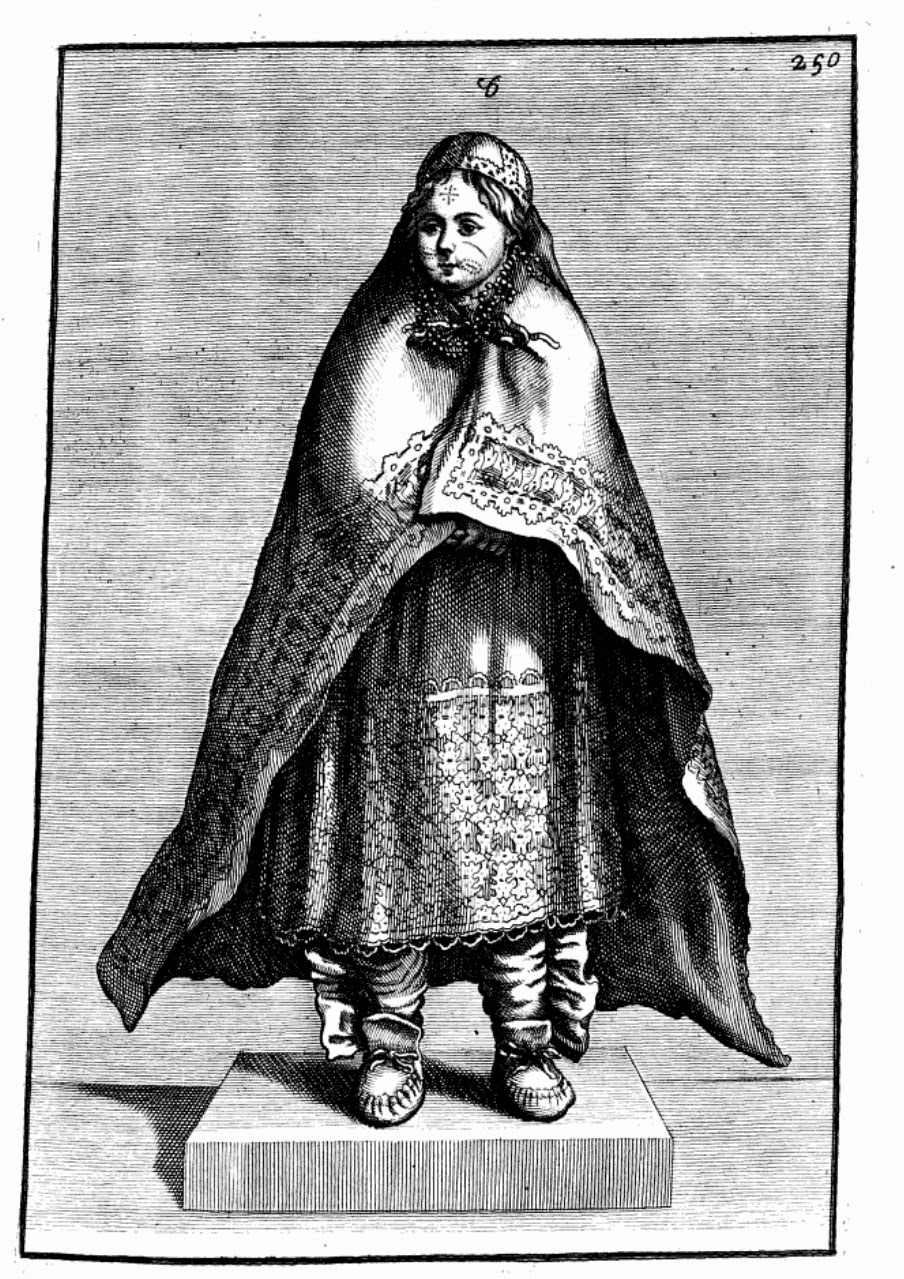 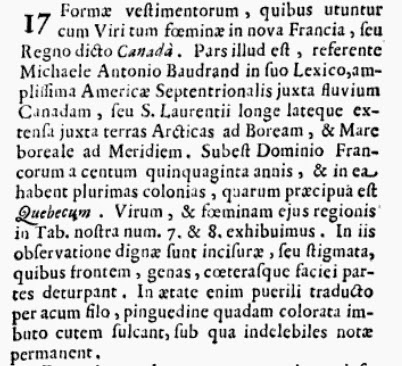 Another Year, Another Success for Fort St. Joseph in Québec!

Last week (August 6-10), visitors to Québec arriving at Place Royale by bus or by ferry were greeted by a small group of people seemingly ripped out of the past. Not just any people or any time: these were inhabitants of Fort St. Joseph, circa 1760.

Indeed, for a second consecutive year, reenactors from Michigan and Indiana were invited to the Fêtes de la Nouvelle-France (or New France Festival) to represent the Upper Country, or Great Lakes Region. As a reminder that the French colony was not only comprised of the St. Lawrence valley but also stretched west to the Prairies and then as far south as New Orleans, this group was a lively and varied one at that. A village represented in a nutshell, our little group was made up of a French Marine, a Jesuit missionary, a Canadian voyageur and his captured English bride, and of course, a variety of Habitant folk. Even all ages were represented: from the delightful young girl to the wise elderly man, a wide age spectrum was to be found under our tent.

Of course, our weeklong experience was an adventure in cross-cultural exchanges: not only were we mingling past and present, but languages as well. After all, most of these American reenactors do not speak French. Nonetheless, they knew how to share their passion for a common history. I was there the whole week helping with these exchanges, acting as a go-between, an interpreter. What a coincidence, really, considering the character I was embodying was a voyageur who would have done the same between French merchants and their Native clients.

The occasion was particularly important this year since French Ontario had also sent a delegation to highlight the 400th anniversary of French presence in the province. One might say the Great Lakes were put on a pedestal this year!
An exchange between Michigan and Québec City is not unheard of: there is already an exchange program between Laval University and Western Michigan University’s archaeology departments (underused, alas). But these two years have probably had the biggest impact on breaking the barrier between both regions. We created public awareness of the American fascination for French colonial life (more than English Canada has ever cared to show). Not only did we promote Fort St. Joseph, but we also gave out flyers and information regarding Fort Michilimackinac and the Illinois Country as well. Who knows how many people will visit the American Midwest thanks to our suggestions?

Inversely, we kept tabs on where visitors were coming from. In a nutshell: everywhere. All Canadian provinces except Newfoundland had visited our setup; many American states came to say hi to their compatriots, and travelers from as far as Australia enjoyed talking to us as well. I also feel confident in saying we had many more visitors than last year.

If fort St. Joseph is being represented in Québec, it’s because three years ago, I had contacted M. Stéphan Parent, head director of the Festival. I had proposed doing a shindig with the Upper Country with either Ontario or Michigan (I’m originally from the Great Lakes; I felt I had to wave the flag, so to speak!). Well, sure enough, the idea sparked interest. This is where my involvement ends: the real credit comes back to M. Parent and his team who not only came up with the idea of bringing reenactors to Québec, but also kindly asked me last year to give a talk on the region. We were already impressed with last year’s experience, so you can imagine how delighted we were to be invited a second year in a row! Here’s to hoping a third invitation is in the works!

All in all, it was a week well spent. I like to think the presence of our group was especially important in regards to historical accuracy. Americans are rabid sticklers when it comes to reenacting (I don’t know if they invented this hobby, but they sure as heck perfected it). Authenticity is always strived for. And in a festival that is understandably subject to popular interpretation of history (as we say in French, la mémoire n’égale pas l’histoire), costumes can sometimes seem closer to fantasy renaissance fairs than anything remotely resembling French colonial life. Then again, I’ll admit sheepishly that a friend of mine had poked holes in my belief that I was accurately dressed. Most of my props were somewhat closer to the 19th century than the 18th. Proof once again that I might be a historian, but I’m no cultural material specialist... But, as the point I was getting to, our Michigan gang was a refreshing glimpse of accuracy and public awareness of it. This said, despite a few observations of the group regarding what I’ve just described, I did have them realize that every year the festival gets historically better as more and more people share in the challenge of trying to be true to the past.

As a historian, I can’t help adding my observation that though I don’t usually practice it outside of the Fêtes de la Nouvelle-France, reenacting is by far one of the best teaching tools available. Joe, our French Marine, regularly uses his uniform to teach kids back in Indiana and Michigan about the French colonial past. I find that walking around in period garb inviting people to touch my beaver pelt is an instant icebreaker to discussions about the fur trade and its history. Kids in particular are especially curious with their innumerable questions. Their bright-eyed queries have stumped me more than once: these are great occasions for the historian to track down answers to simple but obvious questions he might never have otherwise thought of in the first place.

The sharing experience was reciprocal. These reenactors all participate regularly at the Fort St. Joseph open house. During this event, they recreate colonial life as visitors come to Niles, Michigan, to visit the ongoing archaeological digs. Coming to Québec, as one of my friends put it, gave them a new perspective on how important this history is to modern Québec and French Canada. We are not talking about a distant, inconsequential past. This is a past that has created our present, the culture of a/many people, and the pride of a nation. If the field of history must pride itself in rigorous scientific study, it must not forget its impact on the public memory and psyche. These two years of exchanges were opportunities to share what New France means to each other across the border, and how we will commemorate this common history together.

That said, our encampment has been the occasion to develop new friendships as well. Whether last year with Philippe, a historian with plenty of public history experience from colonial Williamsburg, or this year with Marie-Hélaine, a local reenactor (who was big help, by the way, in translating!) or our dear Monique who would come around, obsessed with our sashes (thank you by the way for the blue one you made for me!), we had plenty of occasions to exchange knowledge, contacts, and laughter.


Once again, here’s to hoping the Fêtes de la Nouvelle-France will invite us once more next year!

Posted by Joseph Gagné at 4:09 PM No comments: 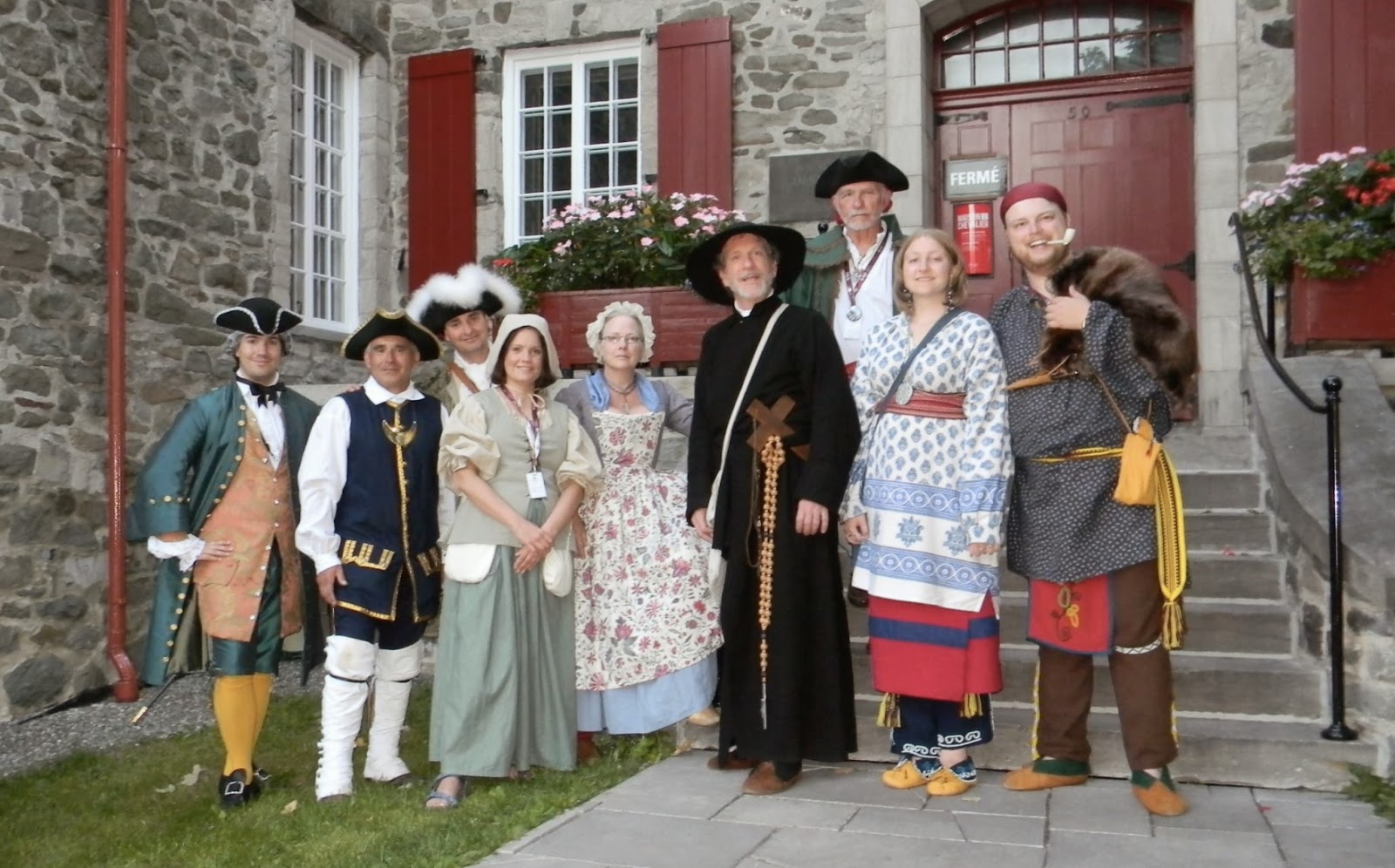