This weekend marks the 260th anniversary of the battle of the Plains of Abraham in 1759. Of course, this battle was not technically the fall of Québec, which was actually formally surrendered a few days later on the 18th of September. And neither was it the fall of Canada: this formality would have to wait after more battles and skirmishes throughout the following year, leading up to the capitulation of Montreal on the 8th of September, 1760. In hindsight, the fall of New France seems inevitable to us today. After all, for such a vast colony, the French presence in North America was only assured by about 80 000 colonists. The neighbouring thirteen British colonies were home to a million American subjects. Yet, at the start of the war, things weren’t so clear-cut: The French were better organized politically and fared better with circumstantial luck. Up until 1758, the French had actually managed to hold their own quite well, in fact (relatively speaking...). Throughout the war, victory or defeat were never as clear cut as some imagined they would be. As exquisitely recapped in David Preston’s book Braddock’s Defeat: The Battle of the Monongahela and the Road to Revolution (Oxford University Press, 2015), the British sent their first contingent of troops to North America hoping to squash the French claims to North American lands. Optimism was flying high, some even going as far as wanting to celebrate victory prematurely with fireworks (to which, cooler heads like Ben Franklin’s cautioned that waiting for results might be more appropriate…). Yet, nowhere was this blind optimism demonstrated as heartily as in this wonderful 1755 engraving I recently found, British Resentment or the French fairly Coopt at Louisbourg. Created by John June and Louis Philippe Boitard, this image was a premature celebration of British victories which would not come to be that year, quite the opposite in fact (with the exception of Fort Beauséjour). Braddock’s army was defeated by the French and their indigenous allies, and most of their goals would be met only after a hard-fought campaign stretching over many years. And so today, to commemorate the battle of Québec, I would like to take a closer look at this image engraved years earlier, its creators not imagining New France would put up such a valiant resistance. 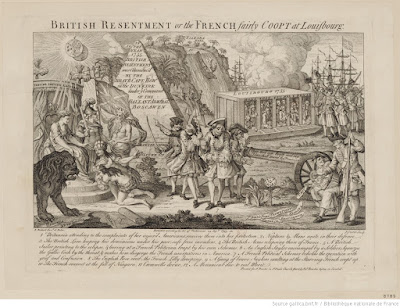 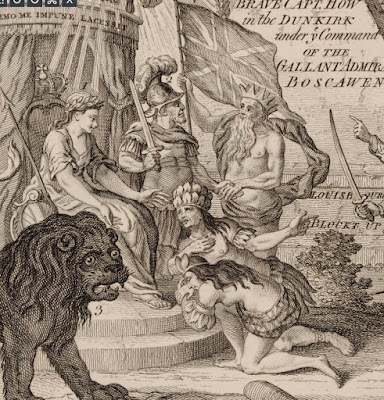 1. Britannia attending to the complains of her injur’d
Americans receives them into her protection.
2. Neptune & Mars unite in their defence.