Ever since I was a kid, I’ve always had a particular fascination for lake monsters. Even though nowadays I highly doubt their existence, their social and folkloric impact still peaks my curiosity. After all, who doesn’t like the idea of a legendary creature lurking just underneath the surface of your favourite fishing hole? If you ask me, lake monsters hold sway in man’s imagination as the embodiment of the mystery in life, as well as the thrill of potential discovery...

Probably the second most famous lake monster in the world after the Loch Ness Monster is Champ, or Champy, from Lake Champlain. Even though Champ has undergone numerous transformations in the public’s psyche throughout the years, from a giant eel-like creature to an actual “sea serpent”, his current iteration has been cemented as looking like a modern-day plesiosaur thanks to the infamous Mansi photograph.

So why am I bringing up Champ in a blog about New France?

Well, it turns out that those who wish to legitimize the existence of a monster in Lake Champlain have been, for years, quoting the writings of Samuel de Champlain. According to them, Champlain was the first European to ever set eyes on the said creature. Some newspapers in the past have been known to claim this as well; this was the case of the Ticonderoga Sentinel who wrote in 1929 that the lake’s namesake had seen a twelve-foot long creature “with a hide so tough that a poniard [poignard/dagger] was broken in attempt to spear him”. But the most famous version of Champlain’s encounter with the beastie has been spread by Marjorie Porter’s 1970 article, "The Champlain Monster", published in Vermont Life. According to Porter, Champlain had witnessed a “serpent-like creature about twenty-feet long, as thick through [sic] as a barrel and with a head shaped like a horse”.

But did Champlain really write anything about such a creature?

Any scholar of Samuel de Champlain’s writings will giggle a bit and then promptly say, “No.” Sadly, the media just reproduced portions of Porter’s writing without critical analysis. Those who did sound the sceptical alarm were simply muffled by the excitement. 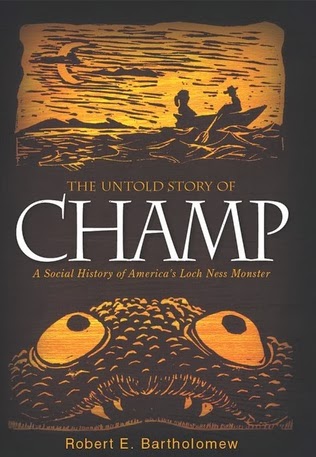 To which I would direct the reader to Robert E. Bartholomew’s excellent book The Untold Story of Champ.A Social History of American’s Loch Ness Monster. As the title suggests, Bartholomew sheds light not on the actual creature’s identity itself, but on the public fascination with the Champ throughout the centuries. From the monster’s first media appearance through to the infamous Mansi photograph story, the reader will enjoy a tread through the history behind the “sightings”. And sure enough, the first “true” account of Champ is not found in the XVIth century, but in 1808.

As Bartholomew points out, a quick read through Champlain’s works (easily available online in French or English, and recently reedited in French by Éric Thierry) reveals that the scariest thing Champlain ever describes in the lake is a longnose gar. Sadly, the explorer does not mention anything near the monster he had purportedly described.


Still, as skeptical as I am of the existence of Champ, I still enjoy the wonderful scenery of the lake and its mountains when I’m visiting French forts in the area. And I keep a particularly sharp watch on the surface of the water, just in case...