To My Friends Thinking of Voting Conservative

Back in 2012, I was fortunate enough to do research in the New Orleans State Museum Archives. Even though I had a scholarship covering my needs for a month, I barely got to do any research in this particular institution: the center was dramatically underfunded, having only a single archivist to help me. To make matters worse, the center was only open three days a week to visitors. And I happened to be on the wrong end of a waiting list of researchers before me...

I kept repeating to myself: Thank god we have good services in Canada. Thank god people have more respect and love for history in Canada. That is, until that morning when I caught up on news from back home. To my horror, it was announced that Library and Archives Canada (LAC) was moving forwards with draconian cuts to its budget. In essence, the repercussions were:


My work depends on having access to archives. It’s what historians do: they do research in archive centres. Yet, in one fell swoop, I’ve lost access not only to interlibrary loans that saved me countless wasted time, effort and money going to Ottawa, but I’ve also lost knowledgeable colleagues who can help me identify and find documents I need among the mountains of material at LAC.

Word was also spreading that the Harper government was planning on « compensating » this travesty by digitizing what turns out is only a mere fraction of the archives. Worse: though these documents have been already payed for by Canadian tax dollars, the digital content would be pay-per-view only for the coming decade. The epitome of bad news is the -still- circulating rumour that the Conservatives wish to sell the digitized material to private collectors. I don’t know how much credence I can give to this last rumour, but I can confirm that on the flip side, the actual elimination of a strong acquisitions budget robbed me of important documents that otherwise would have - should have - been purchased by LAC instead of being lost forever to the collectors' market.

And the Harper government was not done: Parks Canada was also the target of senseless  cuts (or rather, a straight-out economic amputation) of about 28 million dollars. Over 600 jobs were eliminated, many being archaeologists and historians. In Quebec city alone, over 30 researchers were fired (only one is left).

Strangely, a whopping 70 million dollars was invested in the commemorations of the War of 1812 (a war that even the Times described as The War No One Wants to Commemorate). The Harper government’s fascination with this event still boggles the mind of Historians today: this war did nothing more than reinforce the status quo which preceded it. All in all, the events and commemorations smacked of propaganda rather than of history: suddenly, Canada was supposed to be a warrior nation of some sort...

And frankly, I have no idea where much of that money went besides the renovation of a few small forts and the creation of mediocre heritage minutes on television. As I recall one journalist pointing out, one million was supposedly spent on an event that was nothing more than a handful of reenactors in a field next to a tiny stage where an actress portraying Laura Secord sang with a dancing cow in front of a crowd of less than 50 people… One million for that??? Shady if you ask me.

I could go on enumerating the various cuts to museums and research programs, the commandeering of history away from historians to create nationalistic propaganda and the blatant silencing of historians and archeologists… I’ll simply stick to saying to my friends out there who claim/believe Harper creates jobs, I would like to remind you that his government made my search for a job precarious and even dangerous thanks to all these cuts.

If you love museums, if you love history, if you love the search for knowledge and understanding, please, don’t vote for Harper. Historians, archivists and archaeologists are the custodians of history. Not politicians. Help us safeguard public memory from the skewing of reality.
Help us save Canadian history. Help us make Harper history. 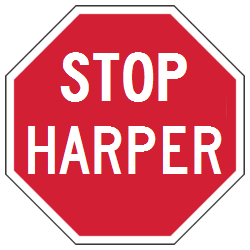