Uh oh... apartment is empty, I have a glass of rum in my hand, and I'm listening to some Gordon Lightfoot... I must be scrambling to write a conference paper!

Yes indeed, this week I will be presenting at the Center for French Colonial Studies in Windsor. Come join us and say hi! For more information on the conference, visit this address: http://frenchcolonialstudies.org/annual-meeting/

Hope you see you there! 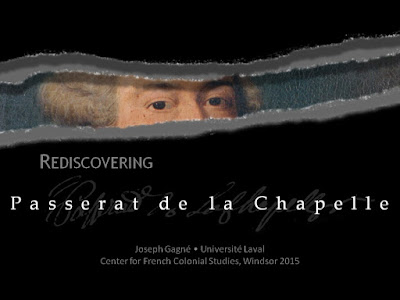 Abstract of my presentation:

On September 8, 1760, the governor of New France signed the capitulation of Montreal. The event marked the final act in the military conquest of Canada. Remaining French forces were directed to lay down their arms and surrender to the enemy. However, a large company of soldiers from the troupes de la Marine du Canada blatantly ignored these orders and fell back onto Louisiana which had, up to then, avoided being conquered. What is most remarkable about this troop is that it was lead by the young Captain Pierre Passerat de la Chapelle, second in command at Fort Détroit. Aged only 26 and with no maps to guide him, the young officer had managed to fray his way across a continent without a single loss. Despite the winter snows, the fear of British pursuit, and the danger of hostile natives, La Chapelle’s most pressing danger would not have been any of these, but a fellow officer: Louis Liénard de Beaujeu, commander of Michilimackinac, equally exiling himself into the Illinois Country. The following clash between these men’s military schools of thought would create a contest of ranks and age, and threaten La Chapelle’s honour and command of his men. The story of this important retreat from the Pays d’en Haut to the Pays des Illinois and Louisiana has been overlooked by the historiography of the Seven Years’ War. This talk will describe and analyse the journey of La Chapelle in the geographical and military context of the period, one of crumbling social order on the cusp of Conquest.